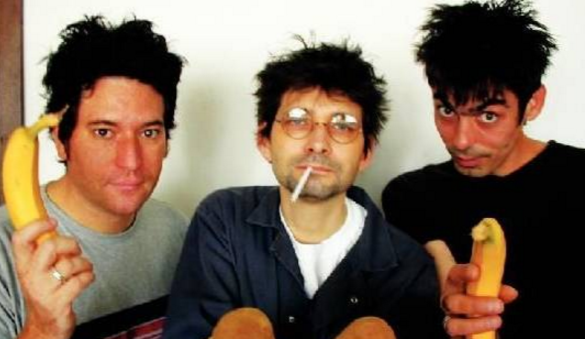 Shellac is a post hard-core band originated from Chicago, IL in the year 1992. They have a unique minimalist style which led the group to refer to themselves as a “minimalist rock trio.” The group was founded by guitarist Steve Albini and drummer Todd Trainer who later claimed Bill Weston as their third member by giving him a job as an engineer at Albini’s Chicago studio. This group was unlike anything the members had done so far. Albini delivers lyrics in a deadpan manner, singing of the darker aspects of the human condition. Their arrangements are patchy and many have described them as being “a melodic.” Their songs usually have a repetitive heavy beat and preferred to use vintage Travis Bean guitars; they interestingly had an aluminum neck which provides a different sound. They would also use a copper plectrum as well as a variety of different pedals. Every part of the process Shellac made sure that what they were producing was original and unique.

All of them have days jobs, so their touring was highly unconventional and unpredictable due their jobs as well as geographical distance. Albini and Weston live in Chicago while Trainer lives in Minnesota. They toured on their time wherever they wanted and will often play unusual venues like riverboats. Shellac has even created music for a professional modern dance troupe.

The band’s newest album, Dude Incredible had been long overdue. They had not released any new albums since 2000. This however, did not mean that there was no new material for their fans. Shellac often performs some of their unrecorded songs at sets. If you see them live you might experience their question and answer session that they usually do mid set. This stems from their desire to be in a more personal setting; they often prefer to play in small venues rather than large locations. They value their fans and want to connect with them. You can see Shellac in a city near you as they are currently on tour. Grab a ticket and go and see a show that will undoubtedly be memorable and one of a kind.