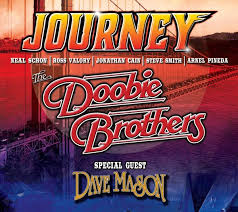 The Power of Music

Music is more than just entertainment.  Music wields tremendous power to influence and bring people together.

Last week, I went to a concert with The Doobie Brothers and supergroup, Journey.  It was at an outdoor amphitheater, which is great for sound quality.  I love sitting way up top, dead-center to the stage and the audio was awesome!

I’d been a fan of the Doobie’s since the 70’s when I was a tenager.  When Journey hit the airwaves in the 80’s, their sound just blew me away.  I was really fortunate to see these two groups together.

Being way up in the nosebleed section, I could see all the fans in the packed-out venue.  There were silver-haired couples enjoying the music together.  As I walked around, I could tell from their expressions that they were reliving their younger years when life was maybe easier.  They may have fell in love listening to some of these songs.  One of them may have been “Our Song.”  I also saw couples with their kids rocking-out with Mom and Dad.  There was a father-daughter combo sitting near me.  The teenaged girl was enjoying the show as much as her dad was.

The music of that era is timeless.  It’s enjoyed by generations and shared by family members  of all ages.  Where the bopity-bop-shooby-doo music of my parent’s generation didn’t appeal to me, teens and twenty-somethings grew up listening to their parent’s Rock and Roll and loving it.  Sure, they listen to rap, pop and hip-hop, but when the high energy guitar sounds of a classic rock band are cranked-up, they rock along with the best of them.

I had a friend with me who grew-up in the 80’s who liked the Doobie Brothers the best.  We had a great time together.  On the other side of me were two girls probably around 18 years old.  I chatted with the one beside me.  I told her that it did my heart good to see her rocking-out to that old music.  She replied that she didn’t like the modern music, even Country.  I said, “You probably grew up listening to this music with your parents.”  She replied, “No, I pretty much discovered it on my own.”  Girl has good taste.

Music: The power to bring back memories, relive forgotten years, and unite families.  That night, thousands were united as one as the energy of Rock and Roll brought them together and made them forget their problems, careers and responsibilities; at least for awhile.

I started to leave during the last encore to beat the rush.  Nudging the pretty young girl beside me, I shouted, “Rock on, Sweetie!”  Her smile was priceless.